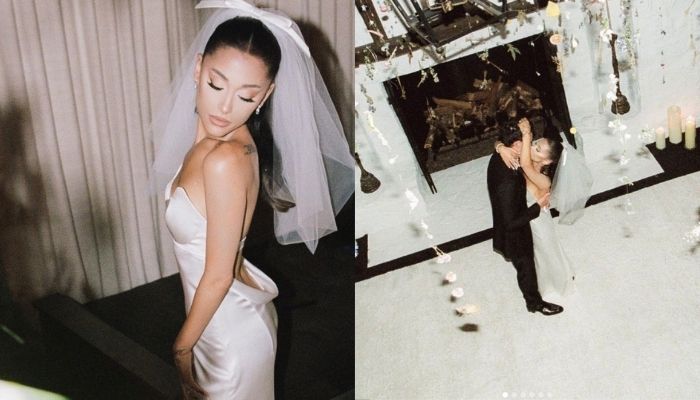 Ariana had previously publicly announced her engagement to the real estate agent Dalton Gomez who is two years her junior. She also informed her fans that the engagement was a result of their year-long relationship which was mostly kept hidden from the public.

While there was no formal announcement made for wedding dates, the couple tied the knot on the 15th of May in a private ceremony abiding by covid protocols.

The two love birds are seen hugging in the pictures which were taken at Ariana’s home in Montecito, California.

The ceremony itself took place in Ariana Grande’s $6.75 million luxury mansion in Montecito, California. The home was previously owned by Ellen DeGeners and the singer had purchased the property in June 2020.

This lavish house was decorated with white floral hangings and candles to give it a warm and romantic look. The decorations were kept minimal and the results are stunning as seen in the beautiful pictures.

Due to rising cases in the US, the wedding was small and intimate with around 20 people in attendance. The guest list was restricted to close family members and friends. Ariana’s father and mother Mr Ed Butera and Mrs Joan Butera were also present for the ceremony and had together walked their daughter down the aisle.

Ariana Grande chose a very simple yet stylish wedding dress that hugged her body and made her look effortless. The world-famous designer Vera Wang was tasked with the design of the elegant dress and the dress definitely helped Ariana shine on her special day.

The wedding gown is made with a simple tulip white satin fabric that hugged her body and accentuated her figure. The low back with the exposed strap design and the crafted neckline made the dress look modern as well as classic.

The singer topped the dress with a dainty short veil and a delicate satin bow. She also adorned herself with a small set of earrings by Lorraine Schwartz, another popular jewellery designer.  The glam team was responsible for the wedding makeup which was kept minimal with winged eyeliner and nude lips.

Her hair was pulled back into a high ponytail, a style which the singer often carried, and the overall look complemented the simple wedding gown.

The bride looked mesmerizing and effortless in her minimalistic and classic wedding getup. Her husband Dalton wore a classic black tuxedo from the prominent designer brand Tom Ford and looked as charming as his beautiful bride.

Ariana also decided to cover up some of her tattoos to compliment her entire look. The singer has an impressive 55 tattoos all over her body which were both stylish and iconic. However, she might have felt that the tattoos will not fit in with her look and decided to cover up a majority of them. Only a few tattoos on her wrists and back were left as it is.

Although, taking a look at her one can’t help but compliment the dedication and talent of her make-up artists who turned her into a beautiful blushing bride.