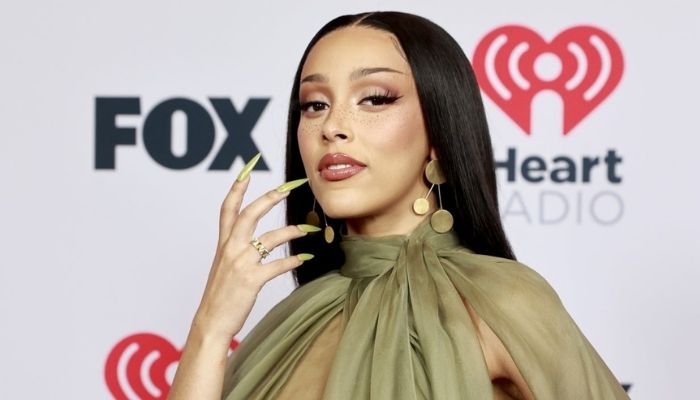 Doja Cat has stunned her fans with a beautiful sheer gown that she wore to the iHeartRadio Music Awards. The 24-year-old rapper and music artist is well known for her extravagant and bold outfits that never fail to make a statement. This event was not an exception.

The iHeartRadio Music Awards was held on the 27th of May this year at the Dolby Theater in Los Angeles.

The event was broadcasted live by Fox Broadcasting Company.

Doja Cat hit the glamour meter with a super sheer and flowy gown. The Sheer style is becoming a favourite of the singer as she had also previously worn a sequined sheer outfit for the Billboard Music Award that was held last year.

The green gown is a masterpiece from the popular designer Brandon Maxwell who is well known in Hollywood. The gown she chose was also previously selected by Gigi Hadid for her maternity shoot in 2020. The gown trails down the body from a loose knot that creates a halter effect on the neck. The overall sheer dress was worn with a olive toned panty.

The bright strappy stilettos complemented the outfit. The accessories were kept minimal with green nails and a pair of modern dangler earrings with circular motifs was worn to complete the almost monochromatic getup. The entire look was nothing short of risqué and further asserted the fact that Doja Cat can rock any outfit no matter how bold and unique it is.

The singer and musician decided to go with light and natural makeup. Light brown nude eyes with long eyelashes showcased her eyes. Her lips were done nude pink with a darker lip liner for definition and style.

A light dust of freckles with pink blush completed her minimalistic makeup look. She opted for a plain hairstyle which was straightened and parted in the middle. Her makeup squad clearly did an amazing job making her look bold and sophisticated at the same time.

Doja Cat also had a light chitchat about her upcoming album “Planet Her” which is highly anticipated. She expressed her excitement about the album and promised the audience that it will be “visually captivating”. This most-awaited album of hers is expected to be released in June 2020. The singer had gained the favour of RCA Records who offered her a deal at age 17.

She has since been making popular music and has often been on top of the US Billboard and has won the award of New Artist of the Year in American Music Awards 2020. Her songs like “Say So”, “Boss Bitch”, and “Kiss Me More” has been trending for a long time. She has also worked with other popular artists like Nicki Minaj, Ariana Grande, and Megan Thee Stalion.