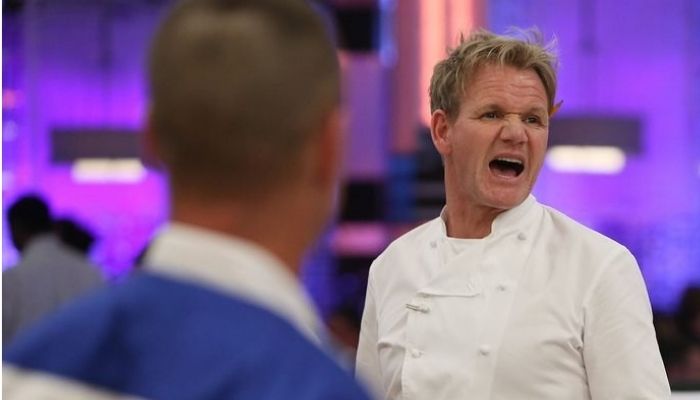 Celebrity chef Gordon Ramsay is put in the spotlight again when videos of his cruel prank went viral on the internet. Netizens are now calling him cruel and heartless for playing such pranks on unsuspecting people.

The celebrity has always been known for his excessive criticisms and creative insults on the shows that he hosted. This time it is a female Masterchef contestant who becomes the prey to his prank. Many of his famous dialogs and insults have been turned into memes and gifts for entertainment and laughs.

Gordon Ramsay strikes again in a video snippet that was found on Tik Tok recently. The chef was hosting the show Masterchef US where he also acts as a judge. Ramsay was testing a female candidate and told her to call her family and friends for the final verdict.

Generally,  in reality TV shows this means that the candidate is selected and the good news would be given when everyone is present. However, after the contestant’s family is called, Ramsay cheerfully declares that she is not selected and needs to go home. The contestant and her family look horrified and surprised at the same time at this awkward moment. Other judges are laughing as well at his antics. The contestant and family leave heartbroken. While he is quite involved with insulting chefs in Masterchef and Hell’s Kitchen,  he is actually very kind and helpful towards the contestants in Masterchef Junior. This further contrasts his behavior and makes it even funnier.

Netizens quickly sympathized with the contestant and agreed that the prank was indeed very cruel.

Many called him evil and laughed at his weird antics. Gordon is actually quite active on Twitter and Tiktok where he cruelly insults and roasts other people’s cooking videos. Many aspiring chefs, or people looking out for some fun, tag him in their cooking pictures and videos to see what his reaction would be.

There are already numerous memes out on the internet with his famous themes of “lamb sauce” and “idiot sandwich”. This will likely be added to the gallery of classic Gordon Ramsay insults.

Gordon Ramsay is actually a very renowned chef who has struggled to become successful in his cooking career. The 54-year-old British chef is actually quite popular in the USA for his reality cooking shows like Masterchef, Hotel Hell, Kitchen Nightmares, and Hell’s Kitchen. H

is own youtube channel has a popular series named “Gordon Ramsay Home Cooking” where he makes videos at his home and with his family 6 members. His restaurant chain has been awarded 16 Michelin stars in total and currently holds 7 Michelin stars. He continues being the permanent judge of Masterchef USA and has hosted many other shows throughout his career. Most of his children are currently pursuing college degrees and his oldest son has joined the marines. He welcomed his youngest son Oscar Ramsay in 2019.