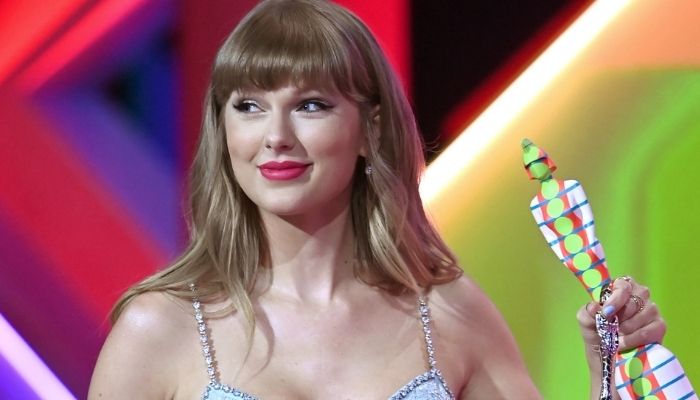 Taylor Swift has recently won the title of Best Pop Album in the recently hosted iHeartRadio Awards 2021. The 31-years-old singer, musician, and song-writter, has gone online with her acceptance speech for winning the iHeartRadio Award. The star singer has expressed her gratitude towards her fans and her amazing team for the success of her album “Folklore” which has won the best pop album Award.

Taylor also said that he had poured her heart out in the creation of the album and it is extremely special to her. She is seen receiving the award with noticeably brunette hair which is quite uncommon for her.

Taylor Swift went online to post a video about her acceptance speech and to share the victory with her fans and audiences. The singer has been on a spree of winning several awards and doesn’t seem to be planning to stop anytime soon.

Taylor is seen wearing a strikingly beautiful floral gown by the Indian designers Hemant and Nandita.

The gown featured a deep v-neck with a beautiful floral pattern in vintage colors. She kept her makeup to aminimal with eyeliner and soft pink lipstick. A pair of dainty danglers accompanied her outfit. The singer who had natural light blonde hair has decided to go chestnut brown with an easy fringe style. While this is a new look for her, Taylor surely does look perfectly serene and sophisticated.

Taylor Swift’s newest album Folklore was released on 24th July of last year during the ongoing pandemic. Despite the pandemic, the album was a huge hit and has even managed to bag a Guinness World Record for biggest opening day for Spotify by a female music artist.

The album got a lot of positive responses from the audience and fans who were surprised with this unannounced drop. Taylor managed to secure a position on the US Billboard Hot 100 and has become the best-selling album of 2020 in the US.

The album also received similar reception in other countries like Canada, UK, Ireland and such where it had topped the charts as well. The album Folklore has also won the Album Of The Year in the 63rd Grammy Awards that was hosted in March this year. Present records state that the album has already sold over 2,000,000 copies worldwide.

Taylor Swift is a popular female icon for many people around the world. She is an established singer and song-writter who has achieved a lot of success in the music industry ever since her teen years.

Her music is themed on pop and country and the lyrics are reflective of her own life experiences and her emotions regarding them. Taylor has gone on to become one of the most well-known and celebrated singers who has won innumerable awards for her music albums. She is also a prominent teen icon and continues to be so even after crossing 30.

Her albums also continue to top charts and break records all over the world. Her estimated net worth now stands at $365 million. She is truly a talented and accomplished singer.