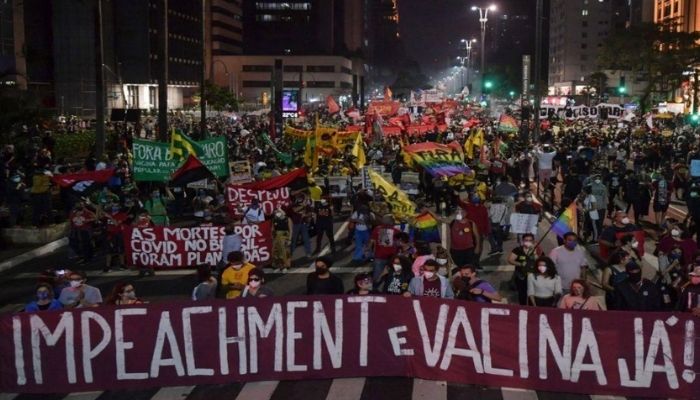 Brazil: Thousands of protesters took to the streets across the nation to protest the dismissal of the pandemic as a ‘little flu,’ by President Jair Bolsorano and the inaction on his part to curb the spread of the virus.

Saturday saw tens of thousands of Brazilians streets across the nation against the Brazilian President over their lethargic handling of the Pandemic that continues to spread unchecked.

This South American country has witnessed a death toll of more than 459,000 due to the coronavirus to date, a number that is second just to the USA. Since the beginning of the Pandemic, the President has constantly been criticised for not taking the Pandemic and prioritising the country’s economic prowess over citizens’ lives.

An investigation carried out by the Brazilian Senate points out the places where the government lacked, including securing and distributing vaccines for the citizens, the promotion of unproven drugs and refuting requests of officials for lockdown and other health restrictions. Further fuelling the already simmering feeling of resentment was the inability of the ruling government to control the further spread of the virus in a country that has already entered the third wave of the virus.

The health ministry reports 79,670 new Covid-19 cases and 2,012 coronavirus-related deaths on Saturday alone. The country has recorded 16 million infections since the beginning of the Pandemic. Despite such a massive spike in the numbers, the fully vaccinated population remains pathetically low, with just 19 million – less than 9.4% of the 210 million population. The Bolsorano government has turned a blind eye to the issue and continues to refuse the people’s pleas to shut the country down under a lockdown. This finally was the end of people’s patience who launched the nationwide protest on Saturday, one of the biggest since the Pandemic last year.

Flyers and signs littered with hatred against the Jair Bolsorano were seen flying around in the protest. It compared his actions to ‘genocide’. It expressed mutual displeasure over his policies, even breaching the subjects of deforestation of Amazon Rainforests and displacement of Indigenous people and seizing their lands.

Major cities of Brasilia, Salvador in the northeast and Belo Horizonte in the southeast saw the highest attendance of protestors.

They mostly remained peaceful; only Pernambuco state capital Recife saw the police engaging in rubber bullets, tear gas and pepper spray to disperse the crowd. Violent methods were adopted that resulted in one of the protestors getting shot in the eye with the rubber bullet. At the same time, Liana Cisne, a local councilwoman of the Worker’s Party, was targeted with pepper spray.

Although there has been denial on the part of Luciana Santos, Pernambuco state vice-governor, over the deployment of police forces by the government and necessary investigation has been launched against it. Meanwhile, Governor Paulo Camara has suspended the police officer and everyone else involved until the investigation yields some evidence. Bolsonaro’s approval rate has been at an all-time low, with just 24 per cent; portraying explicit displeasure and contempt present in the citizens.