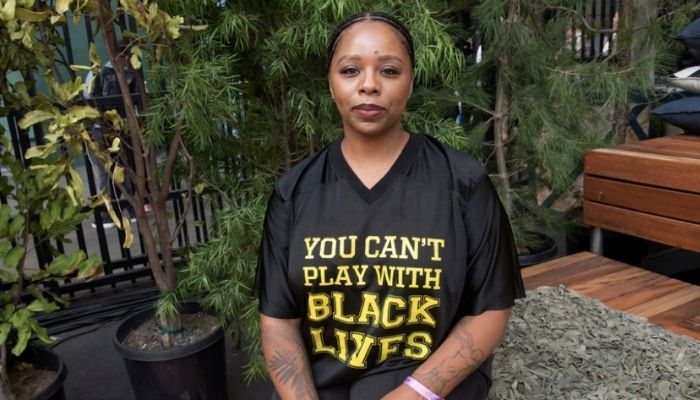 On Thursday the co-founder of Black Lives Matter Global Network Foundation (BLMGNF) announced that she would be stepping down from her role at the helm of the organization of which she had been a part of from the last six years. The announcement comes at a time where she is being accused with several allegations and charges. Although she has cited the reason as her personal choice in order to dedicate more time to her individual space, many have linked it to the recent controversies surrounding her. Friday was her last working day after which she has permanently departed from the organization.

Cullors co- founded the foundation back in 2013 along with two other black women: Alicia Garza and Opal Tometi. Initially it was just a movement that voiced the injustice carried out against the black people using the tag BlackLivesMatter. The movement especially gathered attention last year over the killing of George Flyod, after a white police officer pressed his against Flyod’s neck which restricted his air flow and ultimately caused his death. The sole reason given was a counterfeit bill. The inaction of police against one of their own caused a stir amongst the black community who started fighting back and demanding justice for George.

A large-scale movement was started against the ever-constant issue of racism which managed to transcend boundaries and ended up being a global movement. BLMGNF played a major role in the spread of this movement and giving mobility to the fight.

The movement stands at an utmost important level with celebrities and personalities recognising its value and pouring in their support so it almost seemed a waste of potential to leave the organization. The co-founder has written off this as just her prioritising her personal life and focusing on her second book titled “An Abolitionist’s Handbook”. She is also set to work on a project with Warner Bros. She had published her first book called “When They Call You a Terrorist: A Black Lives Matter Memoir” which came out in 2018 and immediately became New York Bestseller.

Several people have pointed out that the resignation very seamlessly aligns with the time when her finances are under scrutiny after it was reported that she was the owner of four houses. She is alleged to have misused the donation for her personal benefit. In her statement she denies any misuse of donation and states that everything she own does not come from the foundation’s money rather it is her own monetary benefits over the years. She has dismissed the issue by naming it as a right-wing propaganda to discredit her and the foundation as well. She says she won’t let anything get to her and she would constantly work towards her ultimate goal.

The foundation itself has been under fire for shifting from its core principles towards a more mainstream philanthropic and political organization rather than Black radical organising hub it used to be.

The reigns of the organization now rests with  Two senior executives Makani Themba and Monifa Bandele.