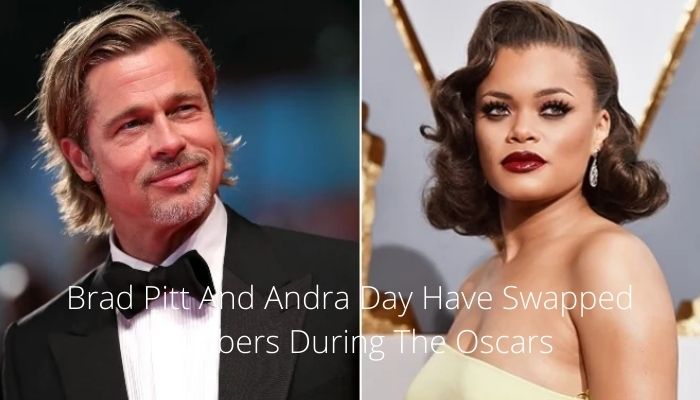 Brad Pitt and Andra Day may be up to some dating adventure in the future. The duo have reportedly talked and exchanged numbers after the 93rd Academy Awards. Brad Pitt after his recent win in the custody battle may finally have decided to rejoin the world of dating with Andra Day. More information on the results of this exchange is being awaited.

Brad Pitt had been having some flirty conversations with actress Andra Day when they attended an award ceremony together.

The duo have reportedly swapped numbers after enjoying the light-hearted conversation backstage at the Oscars. They may have been looking for some fun time together or just want to be acquaintances. Friends of Brad Pitt have however remarked that they will make a cute couple.

These comments have further heightened the suspense and curious fans are waiting to see if the duo have a chance for romance. So far they haven’t been seen going out in public but who knows what the future holds for the two celebrities.

Brad Pitt has recently experienced some good luck after successfully winning the custody battle against ex-wife Angelina Jolie. The 57-years-old actor has been awarded 50% custody of his 5 kids a few days ago.

The extremely famous actor is well known for his outstanding performances in Hollywood and his high-profile love life. The actor has played major roles in popular films like Fight Club, Mr. And Mrs. Smith, Troy, World War Z, Ocean’s Eleven,  and so on. He has also received multiple Academy Awards and Golden Globe awards as an actor and director.

His personal life also has been linked with some popular celebrity names. He is the ex-husband of FRIENDS actress Jennifer Aniston and the stunning Malaficent actress Angelina Jolie. However, he is divorced from both and is single at the moment. With the settlement of the custody case, Brad may have finally found the opportunity and time to indulge in some much needed romance.

Andra Day is a singer and actor who has recently won a Golden Globe Award for the title of Best Actress in A Motion Picture. The actress has become popular after her biopic The United States vs Billie Holiday. The film is based on the story of the singer Billie Holiday who was famous for her song “Strange Fruit” which was about anti-lynching. This movie won Andra the Golden Globe Award and she subsequently rose to fame. She is now currently single and chances are that she may entertain Brad if he offers to spend time with her.

Brad Pitt has recently been speculated to be in a relationship with the model Nicole Potrualski. This news however died down and Brad had been reported to be concentrating on his battle with Angelina for the custody rights of his kids. Previously he had been accused of domestic violence by Angelina Jolie who had alleged that Brad had hit one of their kids during a family flight together. She also sued for full custody citing that Brad is an unfit parent and their kid’s mental well-being would be affected if they lived with him. However, the court dismissed these concerns stating that the claims are not enough to award her full custody.