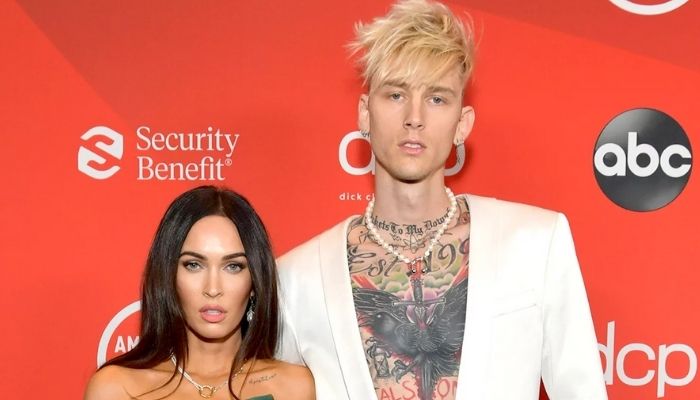 Megan Fox and her beau Machine Gun Kelly have appeared on stage to celebrate his Indy 509 Weekend Concert.

The concert was being held in Grand Park, Westfield, Indiana and the singer MGK was on stage giving an energetic performance. Megan Fox joins her boyfriend for some cute on stage romance and wins the hearts of the audience.

The couple has been dating for a year now and the two seem to be completely enamoured with each other. The couple has made numerous public appearances in the past and is not shying away from expressing their love for each other.

Megan Fox went on stage with her current boyfriend Machine Gun Kelly who was making a live performance at the Barstool Sportsbook Party on Friday the 28th of May. The couple had a little on-stage romance with a live audience. Megan joined hands with her boyfriend while he played his famous song “I Think I’m Okay”.

The song is a part of the album Hotel Diablo which was released in 2019. The couple made an exit with Megan drawing smoke from MGK’s cigarette and then kissing his arm which made the crowd explode.

Megan Fox attended the concert in a sexy black deep neck crop top and light jeans which showed off her toned body. She also had light makeup with her hair wavy and parted in the middle. Her boyfriend Kelly was dressed in a black tank that showed off his intricate tattoos and dark trousers for his performance. He also wore a beaded necklace and bracelet with a dangling earring in one ear.

The couple had become familiar with each other while they were filming for the film Midnight in the Switchgrass. The film was halted in the lieu of the pandemic and the release date has been pushed back.

The couple however were able to develop deep feelings for each other and started dating around mid-2020. Megan even appeared in a music video of Kelly titled My Bloody Valentine,  back in May 2020. Kelly recently announced their first anniversary on Twitter. The tweet said, “She said ‘i love you one year ago today”.

Megan Fox had been previously married to Brian Austin Green who is also an actor. The couple split in 2019. After the split, Megan began dating Kelly last year and they are still going strong.

The 35-years-old actress and model is famous for her part in the popular Transformers series. She has also received numerous awards due to her performances in the past. Machine Gun Kelly is a popular rock music artist who has won the Top Rock Album and Top Rock Artist in the Billboard Music Awards 2021. Megan had accompanied him to the award show where the couple posed for a picture on the red carpet. The actress had worn a deep neck black gown and posed with Kelly who wore a white shirt with a black jacket.