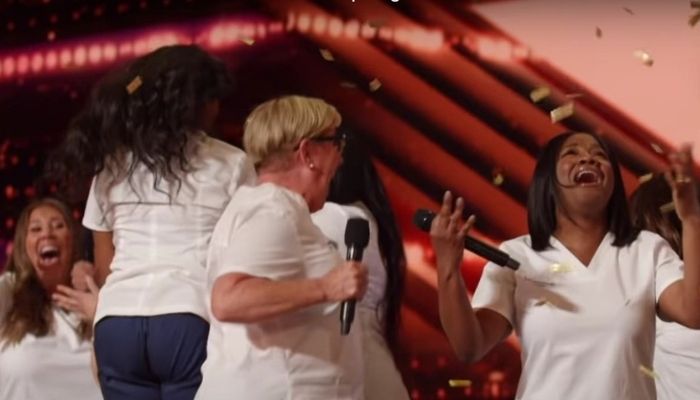 The heroes of today, the front-line workers during the Pandemic, delivered a stunning and soul-touching performance on America’s Got Talent. Songs indeed heal, and when the singers are the ones who save lives, then that song gets an even more significant meaning. The performance was so moving and addled with emotions that the judges and audiences were reduced to tears.

The very first episode of the sixteenth season that premiered on 1st June kickstarted with ridiculously talented people who had been blessed with heavenly voices, heart-stopping talents and breathtaking acts that forced the audience to sway on their feet and be on the edge of their seats.  The new season promises to be even bigger and better. As the acts try to please the judges, the judges try their best to give their judgement against hilarious or risky performances. The panel of the judges featured Simon Cowell, returning after leaving the last season halfway through because of an injury, alongside Sofia Vergara, Howie Mandel and Heidi Klum.

One of the episode highlights was the show-stopping performance by a choir named ‘Northwell Nurse Choir.’ The group performers consisted of 18 members, all of whom were nurses working outside of New York City. They regaled the story of their front line work during the pandemic. They shared the trauma and hardships they had to face every day during these times, the sudden, grim impact on patients and their own families getting sick, and how the choir was not just created for singing; instead it was to give out a message.

They said that their mission as a choir is to “shoot out some joy and love” and help people across the world “find their resilience.” The genuinely mesmerising and powerful song that struck a chord with everyone present in the room was like a beacon of hope, persistence and light during these dark times. This act added an element of speciality to the new season.

Just before the performance, the leader of the group gave a message out to the audience, “We know that there is a lot of us out there that are still hurting, and we’re hoping to just shoot out some joy and some love, and to let them know that we found our resilience, and we’re hoping that they do as well.”

For their live performance, the group chose a mashup of “Lean On Me” and “Stand By Me,” that had the viewers locking their unwavering gazes on them and refusing to look anywhere else. The perfect blend of harmonies, dance sequences and impressive individual performances had the room brim with tears and captivated eyes.

The audience was so moved that they were left with a standing ovation and hollers of appreciation. What awaited them more was the awe of the judges and inevitable and faintly unsurprising Golden Buzzer.

The reaction of the judges was everything they could have asked for and more. Simon Cowell pointed out the need for the performance by saying, “We need you, the world needs you.” Sofia Vergara was at a loss for words and kept pointing out all the adjectives she possibly could to describe the performances over her inability to comprehend.

Howie Mandel deemed the performance as ‘heroic’ and, in lieu of describing his appreciation, slammed down on the Golden Buzzer. The performance has left tears in its wake, and the viewers cannot wait to see much more performances like this in the future.