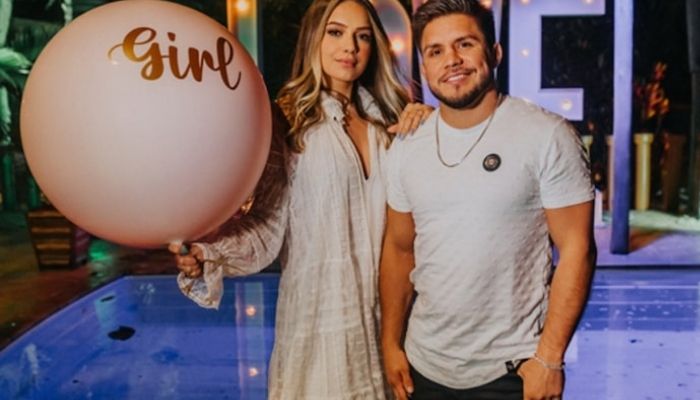 Henry Cejudo has announced to the world that he and his girlfriend are expecting a baby girl. The couple had first announced their relationship publically in November 2020. They had also announced their announcement on social media on the 2nd of June this year. He is expected to make a brief appearance in UFC after staying off his game for some time.

Henry Cejudo had some exciting news for his fans on Tuesday. The famous UFC fighter has posted on Instagram that he and his girlfriend Anna Karolina are engaged.

The couple also had a secret surprise and said that they are also expecting their first child together. They recently did a lavish gender reveal party and from the pink decorations, we can tell that they are having a baby girl. They have already decided on their daughter’s name and announced that she will be named America.

Henry Cejudo and girlfriend Anna Karolina had gone public about their sweet romance in November last year. The couple has been spending a lot of time together and seems to be enamoured with each other. The fighter had revealed to his fans that he had a secret crush on Anna for four years before a friend did him a favour and introduced them. Sparks flew and now they are on their way to start a family and spend their lives together.

Henry Cejudo is a 34-year-old UFC fighter who has now retired from the profession. The fighter is one of the few in the UFC to hold two titles in different weight classes at the same time. The fighter has also won an Olympic gold medal in the 2008 Olympics that was held in Beijing. He had won in the freestyle wrestling category in the 55kg category.

He has also won two UFC titles one in the UFC Bantamweight Championship and the other in UFC Flyweight Championship. He has however announced his retirement from UFC in May 2020. The decision came after his win against Dominick Cruz at UFC 249. He has however hinted at a UFC comeback this year. Fans have to wait before he confirms his decision on social media. Anna Karolina is a Brazilian model who is now set to marry Henry Cejudo after they have their first child.

The couple is just a few months shy of their delivery date and are excited to share the news. Henry had proposed to his girlfriend on 29th April 2021. The proposal was made in the presence of Ana’s family and she said yes. However, the details of the engagement were not made until yesterday. Henry seems to be enjoying fatherhood and is all set to take good care of his daughter once she comes.

‘The Medium’ brings back the chills of Shamanism with the new trailer
‘Carnaval’ Review: Netflix Sends an Influencer South of the Border in Brazilian ‘Girls Trip’
Comment