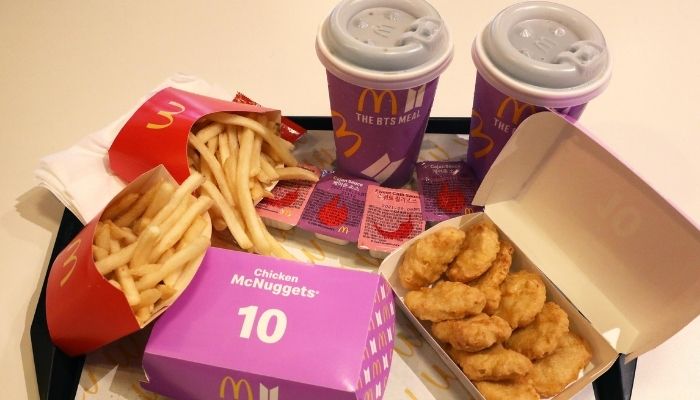 The much-hyped and most anticipated collaboration between the two favourites BTS and McDonalds is here for everyone’s plate and as expected in the black market. The meal which promises to leave you drooling was something that the entire BTS fandom was looking forward to. What’s better than a delicious meal themed around your favourite boyband? Nothing was the answer we got from ARMY, the devoted fans of the Kpop band. It is already driving them crazy and they are doing everything to get their hands on it.

The band consisting of Jin, V, RM, Suga, J-Hope, Jungkook, and Jimin have always announced their undying love for fast food over interviews and shows. And they have finally decided to extend this love to their dedicated fans. A meal that consists of their personal preferences have been packaged and marketed as ‘BTS Meal’ and is being seen as a way for the fans to get closer to their idols.

What is the meal?

Like every other middle-aged man, BTS too has a soft spot for unhealthy fast food that leaves them reeling with the pleasure of taste. And this is clearly reflected in the meal. The meal is typically made up of a 9 or 10-piece order of Chicken McNuggets, medium fries, and the Coke drink. But what makes it even more special and worth naming it after a wildly popular band is the sauces that accompany it. The two sauces a sweet chilli sauce, and a cajun sauce are especially inspired by the taste of South Korea, the country of origin of the band.

The sauces have been exclusively made for the meal and won’t be available for purchase separately. The meal would wrap in purple packaging that would stand it apart. A logo announcing their collaboration would be also pictured on the top of those packets.

Along with the food some exclusive merchandise complementing McDonald’s has been launched that could be purchased separately by the fans.

BigHit Entertainment, the parent company of the brand has released their statement expressing their delight over the collaboration and the excitement of the boys to let fans taste their favourite. They had also expressed their anticipation of seeing the fans’ reaction.

Even though the fast-food chain is globally connected with branches spanning across the world, there are some nooks and crannies left untouched by it. This has upset the fans of this region who are unable to taste the flavours of their idols. And this has turned them desperate. In order to even get a gist of these sauces, they are resorting to getting them over eBay even willingly paying double the price of the individual products.

And the craziness of the fans and their devotion can be comprehended from their rush to secure the packagings and sauces by buying the meal in bulk. Along with their personal satisfaction, the fans are trying to monetize their advantage of having access to these meals. There has been a flurry of action to resell paper bags, boxes, drink cups, and dipping sauces.

The ridiculousness of the prices can be judged from the fairly alarming $200 priced sauce and $193 priced white BTS themed nugget box. The meal boxes alone are being sold for $80 with an overcharge of shipping.

How Much Is ‘The Office’ Star Ellie Kemper’s Family Worth?
Woonsocket native impresses ‘America’s Got Talent’ judges with his ‘rhythmic spasms’
Comment