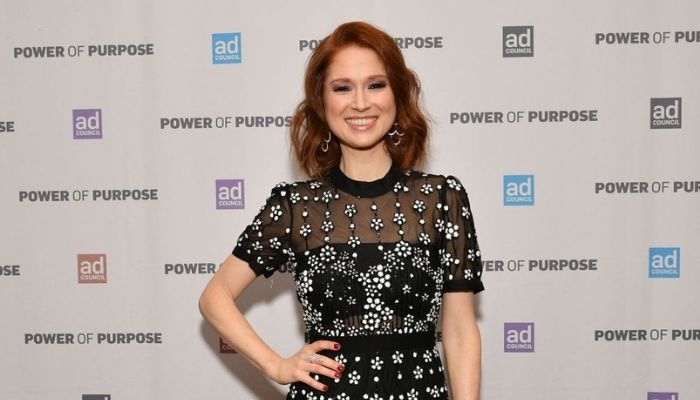 Ellie Kemper the actress who would forever be known as Erin Hannon on The Office and Unbreakable Kimmy Schmidt was trending on Twitter. The people who opened the social networking site got unsurprisingly excited. Their all-time favourite was trending. Was it going to be a new movie? A new show? Something big happening in her life? But all their hopes were squashed when they finally saw the real reason. The photos which surfaced left the fans disappointed and frankly angry.

Ellie who was a sweetheart amongst the fans, always smiling and laughing, these photos were very unexpected and had people reeling. Some people were regretting even believing that they could finally get an unoffensive celebrity.

A photo showing Ellie crowned as the Queen of Love and Beauty at the Fair Saint Louis in 1999. Now it might seem like a harmless crowning. What could possibly be the problem with winning a beauty pageant that too by an actress known for her evergreen beauty? Well, it is nothing wrong. What really was the problem was the ball itself. The Fair Saint Louis previously called the Veiled Prophet Ball is an epitome of racism and obviously a source of anger for the people.

A report lead by ‘The Atlantic’ revealed back in2014 how the Veiled Prophet Organization initially refused the admittance of Black and Jewish people. It is an elite only organization of the white residents of Missouri and the winner of this pageant is crowned not on the basis of how beautiful they are inside out rather how much money they own. A rich white girl is all you need to be. The parade that was started by Confederate officer Alonzo Slayback always had an underlying tone of racism from the very beginning. It is nothing but just a fancy way for the rich people to establish their dominance over the rest of the people.

The pageant selects a veiled prophet that chooses the Queen of Love and Beauty amongst the attendees. A special confidential offer is extended to the elite of the society and presented with expensive keepsakes such as a tiara or pearls. The actress was 19 when she was crowned, an age where she was fairly aware of the type of ball she was attending and twitterites have mutually agreed to not let this issue pass.

Although the wealth that the actress grew up in has never been a secret with her dad was the chairman and chief executive of Commerce Bank, the actual amount that made her capable of winning such a title has the fans speculating. Tracing her history has her linked to the most influential people in the county. Her grandfather is the founder of Commerce Bank while her father and mother are graduates from the elite universities, Harvard and Princeton respectively. She attended one of the most elite high school with a yearly tuition of $30,300.

To sum it up the entire wealth of the Kemper Family stands at $425 million. Kemper, who is married to writer and producer Michael Korman, is worth $9 million.

Tyler Joseph Net Worth 2021: Age, Height, Weight, Wife, Kids, Bio-Wiki
BTS Meal is here, and it is already in the black market
Comment