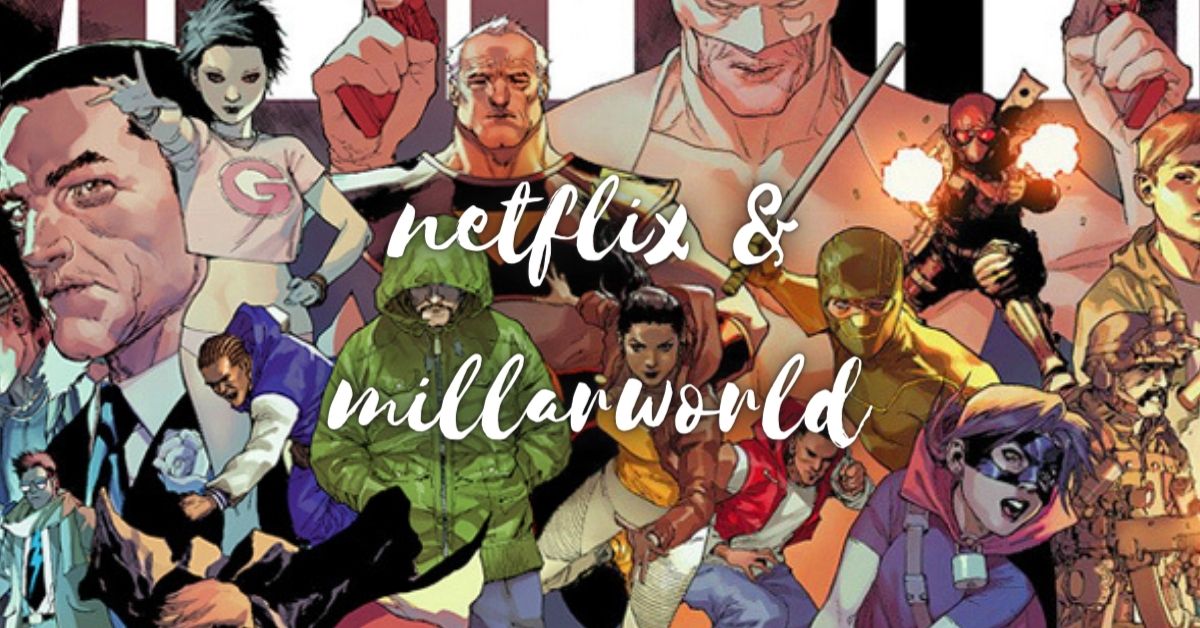 When the highly budgeted series Jupiter’s Legacy, Netflix’s dream project, flopped and failed to leave an impact in the industry we were refused a second season. Instead, what we’re promised was an entire cinematic universe, Millarworld, a superhero universe that seeks to stand on the same ground as MCU and DC. The universe was created by Mark Millar who also created the company Millarworld Limited, the one responsible for publishing the Millarworld comics, since 2004. Under Netflix, it is all set to release an entirety of its comics as either movies or series.

Let us explore all the projects that are under development and the possible release dates.

The dream project of Netflix, reportedly $200 million budgeted, was a flop that did not meet the expectations of people who had high expectations from a highly popular comic series.

Jupiter’s legacy is a story that works with the next-gen superheroes who try to live up to their superhero parents’ legacy while also trying to save the world from the threats and supervillains. Season 1 which left in a cliffhanger was going to answer the open-ended questions in season 2 which unfortunately won’t be releasing anytime soon. Even though a vague statement from Millarworld hints at a possible season 2 sometime in future but the fans aren’t really optimistic about it. Even if does get a renewal getting the cast together again would be challenging as it features a cast of high-end actors.

This is the only Millarworld bannered series that has already entered the production stage. According to the May 2021 update, Millar has revealed season 1 will consist of 13 30-minute episodes. The series would be available for watch first at the Annecy Festival in June 2021. The anime series is due for release before the end of 2021.

Description: When the market is flooded with competition and the authorities are on your tail, what’s an all-American super villain to do? Go to Spain, of course, Johnny Bolt convinces his villainous pals to pull off one last heist but will culture shock get to them before the policia do? And when Johnny’s target is revealed as the greatest supervillain of all time, things go horribly wrong.

The most controversial comic of the Millarworld is all set for release in both English and Spanish. The series follows the story of how Jesus descends back to Earth to battle against the antichrist to save humanity. No cast has been announced of the series but the famous director Everardo Gout, known for National Geographic’s Mars, and episodes for Netflix’s Luke Cage and AMC’s The Terror, would be taking up the role.

American Jesus wraps in Feb and none of our new projects launch until 2021. How will you cope? Here’s a wee preview of everything I’m writing at the moment from the drafting board in my office. #NetflixLife pic.twitter.com/ZOvMGjpIrH

The filming of the story has already begun in late 2019 in Mexico and the production has already been wrapped up in February 2020. The chances of the series releasing rests around the end of 2021 or beginning of 2022.

Status: Back in development after a break in 2020

Written by Lindsey Beer, Olivier Coipel and Mark Millar the story is set around five families who posses magical abilities as they try to navigate the world full of threats and problems. It almost like an equivalent of Harry Potter by Netflix. What makes the series especially special and interesting (and possibly the biggest hit for the Millarworld universe) is the ability of the families to connect different realms, implying a crossover in the future, as was teased by Millar.

Filming started early and was supposed to continue but was disrupted due to the pandemic situation. However, a statement of Netflix in October 2020 announced that they would be no longer continuing with the series for time being. This did not dismiss the future filming. And this came true when Millar later announced in May 2021 that the series was back in development saying that ‘they would be going to writer’s room soon.’

Description: The comic is centred on the Magic Order, which is a secret group of five families of wizards entrusted to keep the world safe from supernatural and magical threats. The members of the Magic Order live seemingly normal lives, with their true nature unbeknownst to the rest of society. However, the Order is in danger as its members are being targeted and picked off one by one by an unknown assailant. The Magic Order must now find and stop this enemy before they get to them first.

The series got permission to start its production on May 2021, helmed by Bek Smith who is known for her Marvel works.

Description: Reborn follows an elderly woman who dies and is reborn in a realm where the forces of good and evil are locked in an eternal war. Upon reuniting with her family and friends in this strange afterlife, she sets out to find her husband and defeat the tyrant who plagues the realm.

Michael Bacall, the famous writer known for his works Scott Pilgrim vs the world w=is joining the project as the writer and director.

Description: Set in a brilliant new sci-fi universe, Sharkey is a blue-collar bounty hunter tracking criminal across the galaxy in his converted, rocket-powered ice-cream truck. Aided and abetted by his ten-year-old partner, he’s out for the biggest bounty of his career.

The famous writer behind Hidden Figures and El Camino Christmas has been attached to this film. The movie is still in its early stages of production.

Description: A quiet seaside town has an incredible secret, that resident Huck has amazing and special gifts. Huck uses his gifts to do a good deed each day, in exchange for the townsfolk keeping the secret. But when a new resident moves into the town and tells the media of Hucks abilities, Huck has no choice but to flee the seaside town and set off an adventure that will change him and everything forever.

New Marvel Series “Loki” To Release on Disney+
This is not a drill: Shadow and Bone have officially renewed for a second season!
Comment