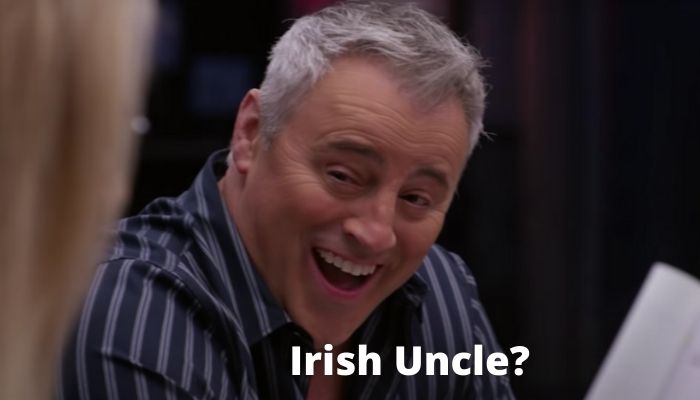 After the Friends’ reunion, Matt LeBlanc went viral, but not for his loved character Joey Tribbiani on FRIENDS but for a different reason this time.

The actor, 53 years old, was known by the social media as the ‘Irish Uncle’ for his dresses, crossed arms and facial expressions.

“Matt LeBlanc is your uncle at a wedding that buys you too many beers and gets your name confused with your siblings while he lovingly rolls his eyes at your aunt,” one tweeted.

Matt LeBlanc is your uncle at a wedding buying you too many beers and getting your name mixed up with your siblings while rolling his eyes lovingly at your aunt drunkenly flailing to Dancing Queen pic.twitter.com/RjxxIIX5RI

Matt LeBlanc looks like your uncle who will still be sharing the Matt LeBlanc meme on Facebook 6 months from now. pic.twitter.com/amZuj8DVkO

One tweeted: ‘Matt LeBlanc looks like your uncle who will still be sharing the Matt LeBlanc meme on Facebook 6 months from now.’

There were many tweets in general but the revelation of the fact that Joey (Matt LeBlanc) dubbed Irish Uncle is shocking to a lot of people.

And in case you’re not quite familiar to Irish uncles, don’t worry: they are very similar to all or at least to the uncle’s Platonic ideal: stupid, slightly backward and, especially, not against pinting. The actor of Friends has still to speak publicly of its new status as the Irish uncle official, but we truly hope that somebody said so to him.

“How *you* gettin on?” pic.twitter.com/eUtpLAurl8

About the FRIENDS reunion episode if you’re not already aware:

The special episode of the FRIENDS is actually a reunion which features the six original cast members of the series. The other five cast members of the beloved Sitcom are shown in addition to Matt LeBlanc, recalling the times shared on and off the screen. Many of the cast and crew can be seen in the show that made them a viral hit in the late 90s and early 2000s, remaking their best known moments. In addition to the mentioned main members of the FRIENDS cast, several other guest stars appeared at the show. Among other things, FRIENDS reunion review(s) described the show as a “emotional joy ride.”

If you want to read more about his, you may check these articles out!

FRIENDS Reunion Hits The Television; Speculations Are Made On The Actors’ Payments

Friends fans are a bit concerned about Matthew Perry!

The most iconic moments from the FRIENDS Reunion